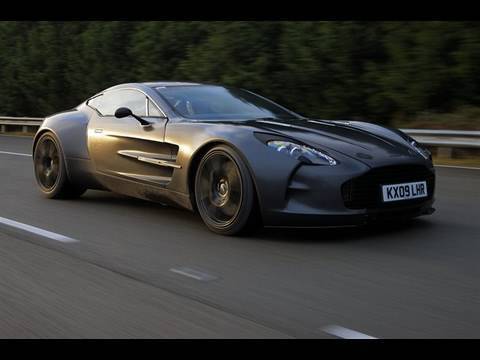 Aston Martin, I think, has always been a very civilized car manufacturer. But now, there a certain lunacy in the showroom brought to you by the British that will rival the most outrageous Italian designs! And Italians have always been very good at making their cars look completely bonkers. There are the big names such as Lamborghini, Ferrari, Maserati, and Alfa Romeo, and a few others. Many of the cars built by these manufacturers were designed by Bertone design group who have also unveiled the Project M. And this particular group is hard to beat when it comes to styling. Have the British finally done it? Have they designed something that will shock like a Lamborghini or a Ferrari?

The exterior is still very much like an Aston Martin. The main shape is still there. It still looks like a DBS, but what I think happened was Aston Martin took the blueprints for a DBS, and gave them to a 10 year-old to redesign. The grill is now bigger, and more menacing, the headlights are styled to look more like that of an Italian super car, and the two key features which set the car apart fom other AM models – the bumper scoops, and the side scoops make the car what it is – a masterpiece. The rear also went under the knife. However, they've done something the Italians didn't – they made the headlights a part of the bumper scoop! Now, it's very unorthodox, and very unlike what Aston Martin have done before, but the end result is magnificant!

The interior, likewise, is absolutely astonishing! It's completely redesigned, it looks the part, and it lt does look like it's part of a car that's more expensive then a McLaren F1, a Ferrari Enzo, Bugatti Veyron, and Koenigsegg. It's styled like none other; and that's not a bad thing, either.

The party piece of the car is, of course, the engine. A big 7.3 V12 producing 700 horsepower! Of course, it's not exactly in the Bugatti range when it comes to performance, but it's powerful enough to give anyone a rush. Driving one of those would be like riding a roller coaster on level road. I can only imagine it.

What Aston Martin have done is outclassed the top players like Lamborghini Reventon, Ferrari Enzo, Bugatti Veyron, and Koenigsegg CCX. It may not be as powerful as Bugatti Veyron, but in terms of luxury and style, nothing can beat it. It's in a class of its own. And with a pricetag of $1.7 million, it's also more expensive then the rest. Well, that can only lead me to comclude that the super car industry is recession proof, since we see the super car market on a rise, while companies like GM and Chrysler, who appeal to the general public, are going bust!